I’ve always loved makeup, but I’ve really only done it on myself before. This fall and spring I joined my school drama club and did the costumes and makeup for the actors. Most of the girls knew how to makeup their faces, but the boys were clueless.

A friend of mine created a short film and needed makeup done so he asked me to help out. I was a little nervous because I’ve never done costume makeup on other people but Pinterest helped me out a lot. He wanted a look that was half cyborg, half geisha, super weird I know. Anyway, the end turned out really well!

Here’s the robot side 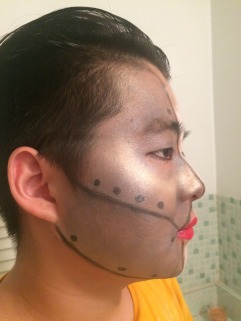 For the base silver color I used my Tarte pallet, I used smoke and mirrors (bottom left) and Slate bells ring (2nd column on left). Then for his highlight I used my bare minerals glitter shadow. I drew on the black lines with bare minerals black powder eyeliner. Last, the “screws” were done with my Ulta sparkle gel liner.

Here’s the Geisha side 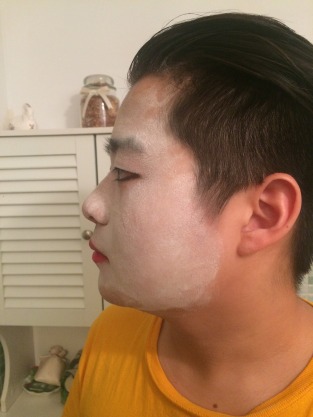 The white is actually all talcum powder. To get the powder to stick to his face, I applied his Neutrogena foundation really tacky so that the powder had something to hold on to. It took a while to get the pigment and fully even, but the end result turned out well.

His eyes are lined with Jordana liner and he’s wearing Revlon red lipstick.

I had a lot of fun doing this makeup and I hope I have the chance to do more stuff like it!